How could we miss out having a plate of Char Kway Teow when in Penang? Generous amount of beansprouts, stir fried egg and some prawns with soft kway teow. Hi Uncle/Auntie, can I order a plate of ngoh hiang? In Penang, ngoh hiang is labelled as lor bak. Although they’re both selling the same stuffs. In Sungai Pinang Foodcourt, East Coast Grilled Seafood is one of the famous stalls that you must order. Grilled BBQ Stingray that was cooked on banana leaf. Fragrant of the banana leaf stained on tender stingray meat. Together with sambal chilli, this was one of the top favourites in my foodie group. Don’t forget to add some fibre into your meal. Thick stalks of kai lan vegetables in oyster and soy sauce. Stir fried squid with sambal and plenty of sliced onions and curry leaves. At zi char, fried omelette is a must order. Crispy omelette at the border and soft on the inside. There is also a steam soup stall that you shouldn’t miss. Watercress and Pork Soup(photo as above) and Peanut Soup with Pork Ribs(photo as below). Flavourful soup base and the auntie is nice too! Making sure we have sufficient utensils. Grilled Chicken Wings and Drumsticks that were well marinated. Popiah comes in a little soggy over time. Some lumps of white rice spotted. Fried rice of not much ingredients except few bites of char siew and scattered egg. It was pretty plain though. Kueh Pie Tee cups were of different shapes. I would prefer Singapore Kueh Pie Tee that is more crispy. Warning: Do not order these 2 dishes as shown. Fried oyster omelette and fried squid omelette were not so fresh. Had takeaway a chinese pancake however the pancake skin was too soggy. Something good to takeaway after a meal. Kacang tumbuk and kacang gula are known as traditional handmade peanut candy and peanut sugar. It’s not only a food gem and also a rare find in Penang. The large crowd starts to flood the place at around 8pm. Similar to Singapore foodcourt, you’ll have to stall at a corner waiting for an empty table. Very unfortunately, I saw a rat running on the roof. I guess hygiene at Sungai Pinang Foodcourt had to be further improved.

-We paid for our food.

How to go Sungai Pinang Foodcourt

Closed on every alternate Monday. 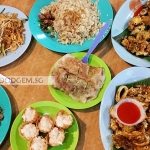