All you want to know about Shake Shack Singapore, American fast casual restaurant. Now, you no longer have to travel all the way to Jewel Changi Airport. Shake Shack has finally opened the second outlet in the Central Business District, Neil Road. Shake Shack Neil Road is located just a stone from The [email protected] Shake Shack sets its foot in the former Tiger Balm factory. The 89 Neil Road Shake Shack‘s design tracks from the nearby ironic colourful Peranakan architecture provides distinct exposure while highlighting local ingredients for two exclusive concretes. As you walk toward the back of Shake Shack building, you can’t miss out the outdoor mural wall painted by our local Singaporean artist, Sam Lo. Sam took 10 days to complete the mural with inspiration taken from the neighbourhood Chinese symbols like Qilin, lucky bat, Peranakan tiling and Malay roof eaves. If you have noticed, Shake Shack Neil Road has maintained the original neoclassical bones like the windows and doors which significantly contribute to the architectural character of historic buildings. Adding modern details like soft pink and mint hues and not forgetting rose-gold accents and pink terrazzo which is unique to Shake Shack Neil Road. Walking towards the end of the casual restaurant, you definitely can’t miss out the wide poster featuring a tiger mural reflecting back to the building’s history from Tiger Balm factory. The ambience at Shake Shack Neil Road hits the dome in the right places, softening classical angles with warm and soft hues will be the next potential Instagram hotspot for Singaporeans. If you’re a fan of Singapore local flavours, go for Eye of the Tiger and Open Sesame concretes. These two dessert flavours were created based on local flavours and exclusive to Shake Shack Neil Road. The cash counter at Shake Shack Neil Road does resembles the outlet at Shake Shack Brooklyn at NYC. Ordering is a breeze, simply place your order and receive a buzzer. When it’s ready, the buzzer beeps and flashes discreetly, collect your food from the friendly service crew. Be one of the first to try the new Chick’n Shack burger at Shake Shack Neil Road. If you think that chicken breasts are bland and dry, try this golden brown tasty Chick’n Shack burger and you may just change your mind. The meat is all-natural, antibiotic-free chicken breast slow-cooked in a creamy buttermilk marinade. Think of crisp and flavourful batter with a hint of black pepper alongside with shredded lettuce, pickles and buttermilk herb mayo loosely attached to the underside of chicken breasts. Beat that heat with a nice cool dessert at Shake Shack Neil Road!

If you have a sweet tooth, go for the Eye of the Tiger showcasing a generous scoop of vanilla custard with the key ingredient lychee and balanced off with raspberry, shortbread and lime zest. I would prefer the bitter-sweet Open Sesame with vanilla custard, black sesame paste, plain vanilla brownies, topped with even more black sesame seeds and gorgeous gold-dusted chocolate sprinkles. Do you agree that the only thing better than french fries is cheese fries! What’s even better? Shake Shack is so generous with the cheese sauce. Shall tuck in quick before the fries turn soggy!

Friday to Saturday: 11AM – 12AM Midnight

Nearby parking available at Craig Place. 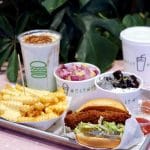