Makino | Shabu Shabu and More! Not To Miss Mentaiko Soup

Home/East, Japanese/Makino | Shabu Shabu and More! Not To Miss Mentaiko Soup
Previous Next

Makino | Shabu Shabu and More! Not To Miss Mentaiko Soup

Makino, a new Japanese restaurant has swung open its door on 26 September 2019. Much anticipation as this new Japanese restaurant is backed by the Akashi Group, the team behind Akashi, Akanoya, London Fat Duck and Gyoza-Ya. The highlight at Makino had to be the shabu shabu soup base and fresh ingredients like seafood, meat and vegetables directly imported from Japan. There are six different soup bases to choose from! Ranged from the Signature soup base including Mentaiko Soup, Makino Spicy Miso broth, Tonkutsu Soup to classic soup base like chicken broth, mixed mushroom broth. You may even add ramen into tonkutsu soup to make it a tonkutsu ramen! Also, Makino ends off the meal the traditional way of making porridge to comfort the tummy. If your friend is not a fan of shabu shabu, fret not! There is a big ala carte menu to choose from set meal, sashimi, sushi, dessert and more! Look at this Mentaiko soup broth filled with so many mentaiko bits. Naturally sweet and light broth before anything was added. Had some fresh salmon trout with fish roe nadare while waiting for the soup to boil. Besides the fresh seafood like half shell scallops, tiger prawns and snow crab legs, you can also order unique Japanese fish made noodles. The texture was QQ with slight crunch. Mentaiko lovers will be delighted to spot their favourite ingredients cooked in this mentaiko broth to be accompanied with many yummy mentaiko bits! Also, not to miss rare mushrooms that are not common in Singapore! Especially lion’s mane mushroom, it’s so soft and simply melts in the mouth. We also enjoyed crunchy oyster mushroom in ruby and golden oyster mushroom. My favourite meat definitely goes to the fatty and oily Japanese ohmi princess wagyu. Ohmi beef is known as the “Japan Top Three Wagyu.” Definitely a premium ingredient for shabu shabu and guaranteed to brighten the day of a beef connoisseur. My friend was a big fan of this spicy miso broth. The beancurd skin came out nicely spicy with an underlying umami aspect. How can we miss out fresh minced meat and special minced prawn? To my surprise, chicken soft bone is added to minced fresh chicken thigh for the extra crunch. The royal milk tea was a hit with imported red bean from Japan. Belly satified with Japanese bitter-sweet matcha ice cream sandwiched between two Japanese crispy crackers at the end of the meal. As most of the ingredients are imported from Japan, the price is slightly steeper than other shabu shabu. Do note that Shabu Shabu is available after 5pm while ala carte menu is available all day.

How to go Makino 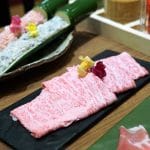