If you’re a fan of the delicate handmade dim sum and roasted delight, Guan Dynasty is good for you! Meet the same people behind famous Guan Chee (over 35 years in operations) specializes in traditionally roasted delights such as Signature Roasted Duck. Guan Chee Hong Kong Roasted Duck has successfully expanded to over 14 outlets islandwide with different concepts including IFish and Sumber Ayam.

With their very first restaurant, called Guan Dynasty, opened at United Square on 8 May 2018. Be spoilt with an array of dim sum from steamed to baked to rice roll to deep fried and pan fried. And also some of the Hong Kong delights including roasted meat, congees and soups. Must try their Signature dishes including Steamed Dace Fish Siew Mai, Black Pepper Duck Bun, Steamed Rice Roll with Crispy Shrimp, Guan Dynasty Roasted Duck and Char siew. One of the dim sums that is exclusive to Guan Dynasty would be the Signature Dace Siew Mai”市桥白卖”; all hail from Guangdong Province. And Guan Dynasty is the only restaurant in Singapore selling this dish.

If you are wondering why are these siew mai in white instead of yellow? It is made from the generous amount of white fish paste instead of the usual pork. Each bite was bouncy and firm and has a QQ texture. It is layered with a piece of Chinese sausage on top that adds a savoury taste to the otherwise light fish paste. A unique twist to the usual rice roll by adding crispy bites and crunchy shrimp. Rice roll was soft when I bite on it. I also appreciate that it’s not too thick. This is something that I would order when I’m in Hong Kong. Glad to see this dish at Guan Dynasty. Now, I know where to satisfy my Hong Kong rice roll cravings. Tender and char-crusted chicken roll tasted similar to sous vide chicken texture while keeping the chicken jus inside. A hint of black pepper gives this chicken roll not just heat, but the depth and immense flavour. Here’s another black pepper dish that you shouldn’t miss.

Unlike the typical crispy PORK bun, the ones at Guan Dynasty have it in DUCK filling.

Their black pepper was done in a unique way. Spot these pillowy sugary buns with a chewy interior filled with savoury black pepper duck meat and a crusty charcoal cave on the outer. Featuring my favourite dish of the day; Guan Dynasty oven roasted duck served with an appetising plum sauce. I enjoyed how crisp the skin is. That crispy skin, that nice layer of tasty fat and a succulent and savoury slice of meat all enjoyed as I couldn’t stop at one. Fried radish was fried to the golden brown but still soft in the middle with thin slices of radishes. Not a fan of egg tart but this is good. They are in mini size and good for one bite. The egg tarts had lightly sweet soft egg custard baked in a buttery and flaky crust. Not a fan of their salted egg custard bun. Honestly, I have a requirement for salted egg yolk lava bun, the lava must be flowing. A little disappointed as the savoury salted yolk taste was good but they don’t flow. It’s like a whole chunk of salted egg paste that sticks together. I’m so sorry to my partner who risked his finger to peel open the piping hot bun. Guan Dynasty has a seating capacity of 80, it’s good for big groups of friends or a family gathering.

How to go Guan Dynasty 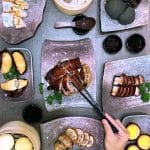