Have you been to Chui Huay Lim Club on Keng Lee Road? The 170-year-old building is probably older than your grandparent. The majestic Chui Huay Lim Teochew Cuisine restaurant 4,000 square foot restaurant serves unassuming classics to exquisite specialties while preserving the Teochew culinary tradition. Stepping into the restaurant with a touch of traditional Chinese decor and feels like I’ve been transported to my grandparents’ time. There are also contemporary dining rooms with karaoke system fitted for any gathering.

In conjunction with the 7th Anniversary of Chui Huay Lim Teochew Cuisine, seven limited edition celebratory dishes will be launched: While this dish isn’t the simplest of meals to prepare, the rolls are first steamed and then deep fried before tossed in sweet and sour sauce. The tender pork belly is wrapped in a crust that remained crispy and not soggy with a sweet and sour punch. The crisp batter is thin that you can see the meat through it. If you’re looking for a comforting bowl of soup, you must order this! I love the natural sweetness from the superior broth that is the result from hours of simmering chicken, pork bones and the secret ingredient, Tianjin cabbage. Floating homemade fish balls and fish cakes are handcrafted from yellow eels. The fish balls are dense and of quality. I can taste the solid fish meat with a hint of fishiness and not those fish balls made from flour. We’re cheering off when the chef presented suckling pig! Well, which foodie doesn’t love suckling pig? We were told that the suckling pig is roasted from raw. The perfectly thin and crisp skin that’s beautifully browned and tender, yet moist meat. I don’t mind having the last “paiseh” piece.

A crispy eggy edge scattered with juicy oysters! I have gotten the piece of crispy omelette and looking for another piece with more “gooey”. It seemed that the “gooey” is not well distributed. Can’t figure out what’s so magical about this dish, the smoky wok hei kway teow? This wok fried ‘kway teow’ will first lure you with the nice smoky smell then you can’t help yourself with a second serving! I have to admit that the innocent looking kway teow doesn’t have many ingredients except diced kai lan and preserved radish. It was wok-fried to perfection while kway teow was smooth and moist with alluring smoky flavour to it. Can’t leave without Teochew dessert! The yam paste was smooth to the throat while there’s a little surprise to tau suan. Who could have thought of adding bits of orange peel to the ordinary tau suan?

We were served with ginseng oolong tea before and after the meal. The former tea being lighter while the later is stronger and slightly dry. 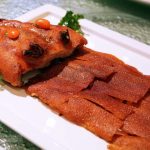